Throughout my early years as a diabetic I had no major health problems, and I coasted along rather easily. I was always very skinny, maybe slightly underweight, until many years later. I had high urine sugar every day, and usually at night. There were, however, some nights that I had very bad hypos. My bedroom door was always left open at night, and my room was immediately across the hall from my parent's room. Mother was keyed in to my thrashing about, and the moans I would make when having a hypo. She would jump out of bed, and grab the glass containing several tablespoons of sugar. She stopped at the bathroom, partially filled the glass with water, stirred the mixture with a spoon, and entered my room. Daddy raised my body, sat on the bed behind me, and held me while Mother slowly poured the sugar water into my mouth. That usually worked very well, but occasionally my mouth was shut so tightly that she could not get any of the liquid into my mouth. Some of these hypos were very bad, and they became seizures. It took a long time to get me to the stage that they could get me to drink some of the sugar water. She would rub some of the liquid on my lips, and I would lick my lips. This gave me just enough sugar so I would start to relax, and then she could get me to swallow some of the sugar water. I would come out of these hypos, not remembering any part of what had happened. Mother gave me all the details the next morning, and again when I was preparing to write my book. I was always so grateful that they took such good care of me at those times. I have no idea how many of those seizures I had before I was an adult, but I know there were many of them. If we had meters for testing, basal and bolus insulin, and carb counting, things would have been very different. There may have been less serious hypos, without the terrible lows that caused seizures. The animal insulin I used for my first 50 years was neither bolus nor basal. It worked at the same level all day, and all night. I think that level was too much at night, and that was probably the reason I had low blood sugar so many times while I was sleeping. That insulin was a 24 hour insulin, with only one injection each day. There was no way of having different dosages with different levels at different times of the day.

To prevent hypos at school, I was not permitted to play with the other kids during play periods or gym. It was that way in grades 1-12. I played at home with a neighborhood friend, but Mother kept a close watch on me. I was usually able to feel my lows before they were so bad. I would tell Mother, and she would give me some sugar. I carried a small container of sugar with me while in schooI. I was never given candy. I think my parents did not want me to know the taste of candy, and other sugar sweetened things. There was never any ice cream in the house, and I assumed there was never any candy, but several years ago my sister told me an interesting story. When we shopped at our grocery store, no candy was purchased. Daddy stopped on his way home from work in the late evening, and bought candy. It was stored very high in a kitchen cabinet. I never saw it. My sister was given a candy bar, and she would eat it in the kitchen. If I entered the kitchen while she was eating candy, she would hide the candy behind her back, with her back against a wall. I never became suspicious. She waited more than 50 years to tell me that. I'm glad she got to have candy, and I am glad I never tasted it. There was artificially sweetened candy that we bought back then. I think the companies selling the candy were Diamel, Loeb and Estee. It wasn't so bad, I still remember the taste. Sweet story, sweet sister, sweet candy. HA!

When I had just started eighth grade I had intestinal flu. I stayed at home several days, and I could not keep anything in my stomach, not the medicine the doctor had prescribed, not even water. My parents thought that since I was not eating then they should not give me insulin. They were afraid I would have a hypo. They did not check this out with the doctor. After several days of no food, no water, no medicine and no insulin I was so weak I could not lift my arms, and I was barely able to move my head. I think I must have DKA at the time. The doctor came to our house, and called an ambulance. I stayed in the hospital almost two weeks. I recovered very well, and returned to school. I hope that those of you reading this know that you need your insulin even if you are not eating. You still need your "basal" insulin under these conditions, but you do not need your "bolus" insulin if you are not eating.

After Anita and I were married in 1964, I was still using the animal insulin. My control was better, with fewer lows, but there were some nights that I had bad hypos, and a few seizures. Anita learned how to handle those lows, and she did a wonderful job. In the 1980's she had to call the local paramedics. That happened three times, and I was given injections of glucagon. The first time I was taken to the hospital, but not the other two times. After the injections I was immediately able to stand up and walk around. It is amazing how fast glucagon can work. On the other two occasions the paramedics let me sign a form that gave me permission to stay home, and avoid going to the hospital.

In the 1990's I started using Humalog, and carb counting. I had a meter for testing my blood sugar at home. My control improved so much! In 2007 I started using an insulin pump, and my control improved even more. I stopped having very low blood sugar. The lows I was having then were not bad enough for me to need any assistance. Anita, however, has memories of how it used to be. She watches me like she did back then. She cannot sleep well unless I tell her my blood sugar level at 1, 4, and 7 AM. That disturbed my sleep a lot for many years, while having to do a finger stick three times during the night. It was difficult to fall back to sleep some of those times. It is so much easier now with my CGM. I can look at the CGM, give her the number, and then go back to sleep. No problem!

I have never been upset with Anita for having me do those night checks. She had to put up with so many hypos at night in the first four decades of our marriage, and she never complained. She never showed any signs of panic, or aggravation with my lows back then. She may have saved my life on some occasions. I love her so much for doing her job, and doing it well. She has painful memories of how it used to be, and my giving her my numbers during the night is the least I can do for her. I will never complain. Never!! 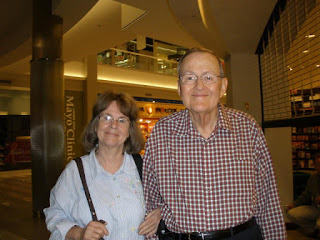