I have been type 1 for 74 years, and I do not have any serious diabetes related complications. While participating in the Joslin medalist type 1 study in 2009 and 2017, I was told that several participants freely admitted that they have not taken good care of themselves. They eat a lot of food containing sugar, and other fast acting carbs. Despite their bad eating habits, they do not have any complications after many years of type 1. All of the 1000+ participants have been type 1 for at least 50 years, and are US citizens. I was also told by the lady in charge during my participation that several participants have used tight control, but have experienced some serious complications. These are the exceptions to the rule. The majority of the participants in this study have done at least reasonably well with their control, and they do not have any serious complications.
In 2011 at a Joslin Medalist meeting, Dr. George King, head of the Medalist Study, did discuss the "special inner protection" that so many medalists have. He said that this mysterious protection seems to protect us against serious problems with our eyes, kidneys, and our nervous systems,,,,but not our hearts. He wanted us to know that we should take every precaution to keep our hearts healthy. There is a secret group on Facebook called "The Joslin Medalists" where many members have posted about their stents, bypass surgeries, heart attacks, etc...but most of these same people have good eyesight and healthy kidneys. There are undoubtedly many younger type 1 people who also have this special inner protection.
After 60 years of type 1, I was diagnosed with spots of retinopathy, and some neuropathy. My A1C had been in the 5.4-6.4 range for many years, but I still had these complications. My control involved too many highs and lows, a roller coaster type of control. Those highs and lows can produce an average which is quite good, so the A1C will also be good. That can give us a sense of false security. The roller coaster control is traumatic to our bodies, and complications can result, even though the A1C is good. I started pumping insulin in 2007, and my control was much more stable, with not so many highs and lows. My time in range improved a lot. The retinopathy disappeared, and has never returned. The neuropathy is still present, but there is no significant pain, and no medication is needed. I do have some numbness in my feet and legs. It caused me to have poor balance. I fell down several times, but six weeks of physical therapy in late 2018 improved my balance. I have not fallen down this year. I am still able to take long walks and work out at a gym.
Avoiding complications seems to require a good A1C, and more stability with not so many highs and lows. If I had started pumping in the 1990's I may not have had any complications at all. I know people who started pumping in the early 1980's. I read about one lady who started in 1978.
I read an article a few years ago that said the life expectancy of young type 1 diabetics in the US is almost as good as for non diabetics. That is very encouraging news!!
Posted by Richard's Rambling Review at 12:40 PM No comments:

My Life On The Farm With Type 1 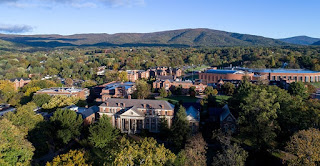 Posted by Richard's Rambling Review at 8:36 AM No comments: