Finding The Right Lady, Our Marriage

I was teaching at Bridgewater College in 1963, in Va. I had a little black book with names of coeds that I had picked from the 1962 yearbook. I showed the list to my dorm mother friend. She looked very carefully at my list and said date this one, her name is Anita, she is wonderful, and forget about the others. That was not my plan, but I agreed to give Anita a call. After a few dates with Anita I was not so interested in calling any more girls, so I just stuck with Anita and Wanda. I dated Wanda on Friday, and Anita on Saturday, Sunday, Monday,..... I guess the dorm mother had hit the nail on the head. Anita was different in a very positive way. Beautiful, so sweet, and I felt very comfortable with her, like I had with Mary Louise. I looked for that little black book one day, and it was gone. I have wondered if the dorm mother had cleaned my room one day. saw my list, and threw it away??? She really did like Anita. I DID TOO!!! I stopped dating Wanda, and Anita and I were going steady. Anita eventually told me that the girls at her dorm had helped her fix her hair, pick out the dress she wore, etc before our first date. I think the whole campus knew we were dating. At that stage I was even dating her on Fridays. Dating every day of the week. I wonder if any other couple ever did that.
I took Anita home with me for the Thanksgiving weekend. Mother loved Anita! Daddy did too! Hey, this is getting serious here!!! Anita and I had already admitted our love for each other. When the semester was over I went home for Christmas, and Anita went to Falls Church, Va to be with her family. It was agreed that I would go to Anita's house the day after Christmas so I could meet her family. Late on Christmas Day a terrific snow storm hit Roanoke. The roads were plowed late the next morning, but the driveway at our house had about 18 inches of snow. My parents insisted that I stay home, and wait to see my sweetie when the spring semester began. They were out of their minds!!! I shoveled the driveway, and packed my car while Mother was screaming at me. I started up the hill on our driveway. Too much ice, it was bitter cold. My tires were spinning, and Daddy helped me put chains on the rear wheels. I still could not make it up that hill. I was about to give up when I saw daddy coming with his tractor. He pulled my car up the hill to the road, and off I went. The roads between Roanoke and Falls Church, Va. were slick and dangerous, but nothing was going to stop me. It took me about six hours, normally it would have been four hours. I found her house, and I met her parents and her brother. Nice people!
That evening we went downstairs to the rec room where there was a fireplace, all warm and cozy. I proposed marriage that evening, and she said yes!!! HURRAY! Months later her Mother said she knew that we were engaged, she could tell by Anita's grin as we walked up the steps. We were going to keep it secret for awhile because we had been dating for less than two months. We planned our wedding for May 31, 1964. We were married after 7 months of courting. We celebrated our 55'th anniversary on May 31, 2019. We have had a wonderful marriage, still going strong!!!
*******************************************
Anita read this chapter after I finished writing it in 2010.. She proofread all my chapters. She said it was to find misspelled words and grammatical errors, but I know she had other reasons as well. She was an English major in college.
She laughed all the way through this chapter.
The first picture below shows Anita when she graduated from high school in 1962. The second shows us with our firstborn, David, 1966. 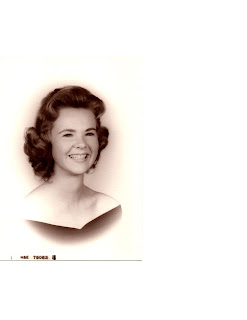 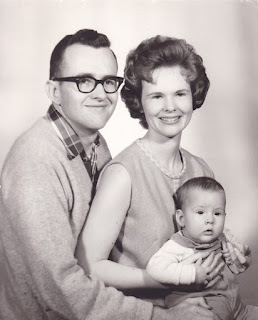 Posted by Richard's Rambling Review at 7:36 AM