My Early Life, Without Sugar

When I was diagnosed in 1945, the doctor told my parents that I should not eat anything containing sugar. I don't remember my reaction to being denied sugar at that time. My diagnosis was only a few days after my sixth birthday. I do remember missing sweet things to drink. For some time I drank milk from our own cows. That was not a good choice, but we did not know that. It did not contain sugar, so we thought it was ok. When we went grocery shopping my family did not buy candy, cookies or ice cream. I don't know what my sister thought about that, she was three years younger, and she probably wanted sugary treats.
A year or so later, we discovered saccharin at a drugstore. My mother learned to prepare desserts sweetened with saccharin. I had pies, cookies, and a birthday cake sweetened with that wonderful stuff. Saccharin was great! Mother made desserts sweetened with sugar for the rest of the family. I was happy with my own desserts, and I never wanted to taste of theirs. My father prepared homemade ice cream, and a portion sweetened with saccharin was set aside for me. I always looked forward to that. It was a summer treat.
One day in our grocery store we saw a display of little bottles containing colored liquids. It was called Kool Aid. It was invented in the 1920s and initially sold in concentrated liquid form. Later on it was sold as a powder in little packets. The Kool Aid we bought in the 1940s was in a concentrated liquid form, so we added water and saccharin. It made a delicious drink. I was very happy.
I had low blood sugar at times for many years, and my mother gave me a glass with some water mixed with sugar. That was the only sugar I had for very many years. I had some awful seizures at night several times each year, and the sugar water was ready for those occasions. If I could not drink the liquid, my father would sit behind me on my bed and prop me up while my mother rubbed the sugar water on my lips and gums until I had enough to bring me around, so I could drink some of the liquid. I think I may have associated the sugar with my seizures, and that may have made sugar even more undesirable.
There were no meters for measuring blood sugar for my first 40 years after diagnosis, so my urine was tested for sugar each morning to determine my insulin dosage, and then I had to depend on my own feelings to detect low blood sugar the rest of the day. While sleeping at night my parents would listen for me to be thrashing around in bed to determine that I had low blood sugar. Their bed was close to mine for many years, so that worked out well.
Now I will fast forward to the current century, and tell you about a discussion that my sister and I had a few years ago. Our father worked at a post office, and he had an afternoon and evening shift. He got home at 11:30 PM. She told me that he would stop at a store on the way home from work and buy candy bars. They were hidden high in a cabinet in the kitchen. I can remember entering the kitchen several times and my sister was standing with her back against a wall, with her hands behind her. I guess I was not curious about that. She was hiding a candy bar she had been eating. I never saw a candy bar, and she waited more than sixty years to tell me about that. We laugh a lot about her candy bars. I am glad she had them, and I am glad I did not see them.
Posted by Richard's Rambling Review at 2:47 PM No comments: 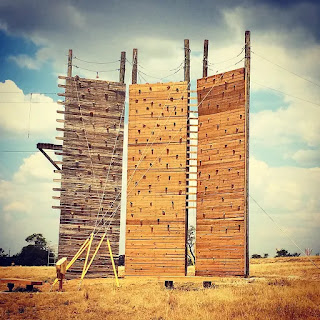 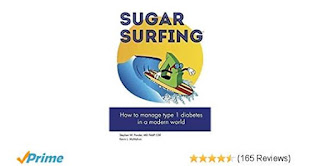 Dr. Stephen Ponder is a pediatric endocrinologist in Texas. He is the author of the very popular book "Sugar Surfing". He is a type 1 diabetic, and he is a Joslin medalist. He will be a speaker in the Friends For Life type 1 diabetes conference in July. He has two sessions scheduled for the morning of Wednesday, July 17. My session is scheduled that afternoon at 3:15 PM.
Here is the link for the conference scheduled July 17-21:
https://childrenwithdiabetes.com/…/FFL-Orlando-2019-Schedul…
Stephen is also a very inspirational blogger. Here is one of his blogs. I really like this one.
The Wall (revisited)
June 7, 2018
Stephen W. Ponder MD, FAAP, CDE
27 years ago I learned an invaluable lesson about living well with my diabetes. It happened in a most unusual way. It has remained with me ever since.
I was working as Medical Director at the Texas Lions Camp for Children with Diabetes. One afternoon I was covering camper activities at the high element ropes course. There was a new 75-foot climbing wall that the campers would attempt to scale. When they reached the top they would ring a small victory bell.
After all the campers had their turn to climb up the adult staff were offered a chance to participate. I was very eager to do it.
But each attempt I made to scale the wall seemed futile. I'd get no more than 10 to 20 feet up and fall off. Time and time again I failed. Quickly, I became frustrated. Excuses began to flow from my mouth. I said there was no way I can do this. I was heavier than the kids. Too old. Weak. Just about any other lame reason or excuse I could conjure up was said. It was a major whine.
The young man who oversaw the activity witnessed my frustration (His name was Todd). He said to me "Dr. Steve, let me show you how to do it".
Todd had only one arm. He lost his left arm above the elbow to bone cancer when he was very young. I watched dumbfounded as Todd scaled the entire wall in a matter of seconds: using both legs and ONE arm. With a feeling of combined awe, embarrassment and deep humility, a warm feeling suddenly came over me. A true epiphany.
I learned a life lesson which has carried me forward to this very day: that while I can always find something to complain about, make excuses for, rationalize away, or simply dislike, the only thing that truly limits me is myself...my attitude and belief in my own abilities. You see, Todd was different…but hardly abnormal. In fact, he accepted no limitations and placed none on himself. I thought to myself that I wanted to be like that guy, not limited by my differences.
Such an incredible lesson I learned one sunny afternoon at diabetes camp in 1991. Type 1 diabetes may make me and many other people 'different', but we should never look at ourselves as abnormal. And most of all, never use our differences as excuses for the things we wish to do or accomplish for ourselves or others. Many of the barriers we place before us are of our own creation. Ironically, I tore down a wall as I scaled another one.
After watching Todd scale the wall, I made the trek to the top and rang the bell. He not only showed me the proper technique, but most importantly, the proper attitude. I often reflect on that day.
I respect everyone’s right to be unhappy, complain, or just simply be mad about whatever angers them. There is absolutely nothing wrong with that. But as I’ve said so many times, life with diabetes is all about choices, and I CHOOSE to look at my condition differently. Todd made a similar choice about his life and I learned from his example.
In the natural world, I should have died after March 1, 1966, the date of my diabetes diagnosis. I am kept alive and relatively healthy each day by artificial means (injected insulin, meters, sensor, etc.…) and my wits. That’s a gift I choose to not complain about. Every day of my “second life” has been a gift. I consider each day I awaken on this Earth with equal thanks and gratitude.
Some of you may wonder why most of my FB posts about diabetes are usually positive and empowering. Now you know why. I have shared this story before with campers. Many could relate, and some just listened politely. We can learn valuable lessons about living well with diabetes or any other life challenge in some of the most unlikely of places or situations. This is one example.
Posted by Richard's Rambling Review at 12:24 PM No comments: