The Joslin Medals, and Medalist Study

The Joslin Medalists are people who have completed 50 years with type 1 diabetes, and who have been awarded a medal for that accomplishment. There are more than 5000 individuals who have this medal. The picture below shows medalists who attended a meeting in Boston in 2011. I am the taller fellow in the center of the back row. There are also 75 and 80 year medals. If you know any long term type 1 diabetics in any part of the world, and they do not have the medal, be sure to tell them to apply. The medals shown are, from top to bottom, for living 50, 75 and 80 years with type 1.
The Joslin Medalist Study in Boston examined 1000 medalists during the period 2005-2015. It was funded by JDRF, NIH, and private donations. I participated in 2009 and again in 2017. The examination was very thorough, and my past history was required, in detail. Many tests were performed while I was at the Joslin Center.
Many very interesting things were found during the study, including the fact that many of us still produce some of our own insulin. Dr. George L. King is the head of the Joslin Medalist Study in Boston. His area of expertise involves researching the causes of, and preventions for, diabetes complications. Here is an article, about three years old, about the research. The quotes are Dr. King's own words.
"The major fears of the diabetic patient are blindness, renal failure, or hypoglycemia—all of which are complications of type one diabetes. Focus groups have shown that, if not for the complications, diabetic patients could tolerate the disease quite well." King is one of the world’s leading researchers into diabetes complications. He is Director of Research and Head of the Section on Vascular Cell Biology at Joslin, as well as a Professor of Medicine at Harvard Medical School, and he has been at both Joslin and Harvard since 1981. “My area of expertise is how insulin interacts with the blood vessels,” King says. Specifically, King is examining the effects of insulin resistance and hyperglycemia, or high blood sugar, on the molecular mechanisms that could lead to degeneration of vascular systems in the body. In 1989, Dr. King spearheaded breakthrough research postulating that activation of protein kinase C is the primary pathway in which hyperglycemia causes loss of function, and other complications, in the retina, kidney and cardiovascular systems. Following this, King showed in a series of studies using vascular cells from the retina, kidneys, and arteries specifically how hyperglycemia contributed to causing various diabetes complications. King’s research into understanding the causes of diabetes complications, so he can help to find ways of preventing them through treatments and lifestyle changes, extends far beyond the confines of a lab or a petri dish. He is working with more than 800 people in the Joslin Diabetes Medalist program —people who have been awarded medals for living with type 1 diabetes for 50, even 75 years —to uncover how they have managed to avoid many diabetic complications through the decades.“They are very interesting people,” King says about his study group. “Some of them built their own glucose meters in the 1960s and 70s, before they were widely available to the public. ”Aside from being avid do it yourselfers, King found other shared traits of those who have minimized the complications from diabetes, despite living with the condition for many years. After discounting genetic factors, King’s research so far reveals that most of the Medalists exercise regularly. They are also very careful with their diets. But, more than this, King noted another shared trait that, although fairly abstract, is very important. “They are very good advocates for themselves,” King says of his subjects. “The are always on the lookout for new treatments. They are definitely a proactive group. They’re not sitting on the sidelines waiting for something to be done for them. They’ll do it for themselves first, if they have to.” King, and other researchers, also discovered that hdl levels, the so-called “good cholesterol,” is high in Medalists without complications.“We are looking into that,” King says about the implications of the hdl levels. By examining the Medalists King hopes to uncover the specific, if not the actual molecular ways in which they are protected from complications. Is it lifestyle? Genetics? Life choices? Or, is it something else? “The hope is we look at humans who are protected, then see why they’re protected, and come up with answers about lifestyle,” King says. “Then, by looking at their tissue and biochemistry (after death) we can perhaps develop medications to simulate the biochemistry that protected them. ”On that front, King says they have discovered a way that naturally produced human insulin prevents arteriosclerosis. “Can we design an insulin to prevent arteriosclerosis?” King says. “I think this may be possible in the next five years." Because up to 30 percent of people with type 2 diabetes use insulin, such a breakthrough would be good news for more than just for type 1 diabetics, he points out. Meanwhile, as researchers like King work to understand the factors that protect some people from the complications caused by diabetes, and until the development, and testing of medications as a result of those findings come to market, there are things diabetics can do to help themselves avoid retinopathy, neuropathy, kidney disease and cardiovascular disease.“Don’t smoke, watch your diet, and exercise,” King advises. “Also, advocate for yourself. Be proactive. That’s the main trait of the Medalists—they stick up for themselves.” 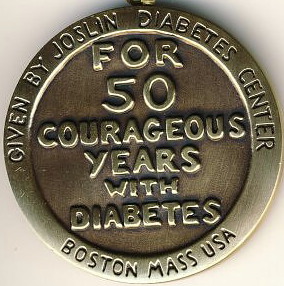 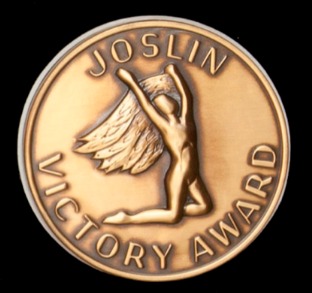 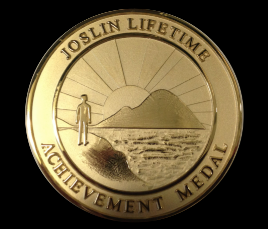