Man Makes Insulin For His Wife
This is a very wonderful story from the Diabetes Health magazine. A man in China extracted insulin from animals to keep his type 1 wife, Eva Saxl, and many other people alive, during war time. She gave lectures, and helped others. She passed in 2002.
http://diabeteshealth.com/read/2002/01/01/3495/evas-insulin/

Posted by Richard's Rambling Review at 6:33 PM No comments:

The Artificial Pancreas Scares Me

After 40 years of testing urine, and not really knowing my blood sugar levels, it was wonderful to have my first glucometer in the mid 1980's. My control was really bad those first 40 years. After using a meter it was obvious that my BG had been much too high during those years. I was seeing numbers in the 200's very frequently, and numbers in the low 300's, too. I felt comfortable at those levels, but I felt uncomfortable below 150, and hypo below 120. It took a lot of adjustments with my diet and insulin dosages to feel good while having numbers in the low 100's. Control was better, but still not so good, until synthetic insulin was available in the 1990's. By the end of the 1990's I was able to use carb counting, and a fast acting insulin. Then my numbers  were so much better, and my A1c's were in the high 5's. I do not know how I survived for 50 years on animal insulin, and type 1, without having any serious diabetes complications.

Improvements in the 21'st century are happening so fast, perhaps too fast. There are several artificial pancreas devices being developed, and tested on human subjects. They depend on a CGM for measuring the blood glucose levels. I am using a Dexcom G4, and it is very accurate about 80% of the time, but there are times it is as much as 30 or 40 points different from my meter. If I was using an artificial pancreas device, and I had a false high, I could be given insulin that I did not need. That would give me a hypo, maybe one that would put me in the hospital! There are devices being developed that would give us insulin when we are too high, and glucagon when we are too low. We would not be making the decisions. The device would be making the decisions for us. I feel very uncomfortable with that. The almighty CGM is not accurate enough to have the device do the decision making. I know that the Dexcom G6 is being developed, and it will be more accurate, but I cannot believe that the accuracy will be good enough that we would never have occasional false highs and lows with that CGM. For that reason I will not use an artificial pancreas, even if one was given to me as a gift.

The "Guardian® sensor 3 continuous glucose monitoring sensor Introducing the most accurate sensor from Medtronic, now with up to 7 day wear and easy insertion. It is the FIRST and ONLY continuous glucose monitoring sensor FDA approved and trusted to control insulin dosing." That one is being sold now, but I will not use it. I am chicken! I am eligible for a new pump in May, but I will be getting the Medtronic 630g. That one can be used without the CGM supplement. I will be wearing my Dexcom G4 CGM, and I will be making all of my own decisions!! I have made my own decisions for 71 years, and I have done very well. I want it to stay that way for the rest of my life. :)
Posted by Richard's Rambling Review at 2:47 PM No comments:

This is very exciting news!!! Diabetics age 65 and older, covered by Medicare, should get coverage for the Dexcom G5 very soon. :)
https://diatribe.org/medicare-reimbursement-dexcom-g5-cgm-now-available?utm_source=diaTribe&utm_campaign=5d9c340f5d-diaTribe_Mailer_123&utm_medium=email&utm_term=0_75cdadd67f-5d9c340f5d-411810781
Posted by Richard's Rambling Review at 9:24 AM No comments:

My Diabetes Now vs My Early Years

From the year of my diagnosis in 1945, until the mid 1990s, I did not need any medications, and there were no diabetes related complications. That was approximately 50 years with no problems. How was that possible? Beef and pork insulins did very well for me, although common sense suggests my blood sugar must have been very high most of the time. The urine tests every morning showed very high urine sugar on most days. There was only one urine test each day until Tes-tape for easier urine testing was introduced a few decades after my diagnosis. There was no basal and bolus control, and no involvement of carbs in my daily routine. My meals consisted of hundreds of carbs, and there was no information about my needing to limit my intake of any foods, except those containing sugar. My doctors had very little advice for me. Despite all these factors, there were no diabetes problems. There may have been DKA on some occasions, but I did not know about DKA until the present century. So how did I avoid complications for such a long time? I think it may have had something to do with the beef and pork insulins I used for all those years. Several online long term friends agree that the insulin we were using did seem to offer us protection from the complications to our eyes, kidneys and our nervous systems. Maybe it was the C-peptide in the animal insulin. C-peptide is known to offer protection against diabetes complications. The synthetic insulin we use now does not contain C-peptide.
When I started using synthetic insulins in the mid 1990s, things were so different. I was aware of the involvement of carbs at that time, so my eating habits had changed. My carb intake was greatly reduced, and foods with fast acting carbs were restricted to smaller portions. I counted carbs and determined appropriate insulin:carb ratios. That, along with my basal and bolus insulins, resulted in my having A1c's below 6.0 soon after the start of the new century. My A1c's before the mid 1990s were much much higher. I think my highest many years ago was 13.
In the late 1990s I needed medications for cholesterol, blood pressure, and water retention. I was also diagnosed with carpal tunnel, and ulnar nerve problems. Frozen shoulders, and cataracts occurred during that time. I was also diagnosed with neuropathy in my feet, and spots of neuropathy in my eyes. All of those things occurred after I stopped the animal insulin, and started using synthetic insulin. How can this be? We know so much more about diabetes now, and we have devices, basal and bolus insulins, and medications that can improve our control so much. Indeed, my control did improve very much, but those complications and the need for medications did occur. Don't you think it would have made more sense for me to have complications in my early years, when I had so much high blood sugar, and almost none of the present day knowledge? I am certainly not unique. There are a few thousand type 1 diabetics in the US who have lived with diabetes for at least 50 years, and without any serious complications. More than 6000 have received the Joslin 50 year medal. Some of them have been type 1 diabetics for 10 or more years longer than me.
There is a study taking place at the Joslin Diabetes Center, in Boston. It began in 2005, and was to have been a ten year study, but it is ongoing at the present time, in its thirteenth year. I participated in the study in 2009. The purpose of the study is to determine the factors that have enabled so many long term type 1 diabetics to live so long, and be so healthy. Maybe the reason so many of us had no complications during our early years will be revealed.
My having some mild complications in the 1990s, and not earlier, is still a mystery to me. Now, in the year 2017, I have more neuropathy problems, but the retinopathy is gone due to better control with my insulin pump. My neurologist gave me an EMG test in January, 2016. He says I have severe polyneuropathy in my legs. There is no bad pain, just numbness, and I do not need medication, so I'm not sure it is severe. Some mild arthritis, some dizziness in the mornings, and the neuropathy are all that are present now. The dizziness and neuropathy make me wobble a bit when I walk, somewhat like a duck. Maybe I can get a job working on TV for Affleck? lol
I am so fortunate to be doing so well, but I will always be curious about how it has all evolved.
Posted by Richard's Rambling Review at 12:30 PM No comments:

William Rounds (1922-2010) was diagnosed with diabetes in 1923, only 2 years after insulin was discovered. He was T1 for 87 years the year he died. In 2008 William was one of eleven interviewed who had lived for 60+ years with T1D. I was one of the eleven. The stories were published in Oct, 2008 in the Diabetes Forecast, the American Diabetes Association's magazine. That was the month that the Diabetes Forecast celebrated its 60'th anniversary. 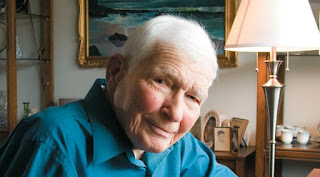 http://www.diabetesforecast.org/2008/oct/long-lives-lived-well.html
Posted by Richard's Rambling Review at 2:51 PM No comments:

This is a very revealing video, showing how important it is to have good diabetes management.